Let There Be Dragons ☥

Book Three in The Children of Ankh series 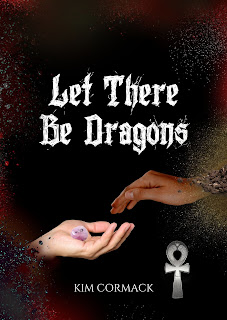 Fresh out of Science Fiction majesty of the Immortal Testing, our Paranormal Fantasy antiheroes have been killed thousands of times in increasingly ghoulish ways, to prove themselves capable of being Immortal. Dark Comedy ensues with scenes that will make you blush and bust a gut laughing. Welcome to Clan Ankh. Take a trip into the metaphysical, spiritual world with these endearing paranormal antiheroes and wickedly titillating warriors. This will be unlike anything you've ever read.
Traumatized after being killed thousands of times in increasingly ghoulish ways, to prove themselves capable of being Immortal, Kayn has become a Dragon, capable of shutting her emotions off, and Zach has been made her Handler. They are brought to another world of Third Tiers to celebrate their victory, where Second Tiered souls are slaves and amusement for the pure-blooded Immortals. Famous mortals are kidnapped, cloned and dumped into a jungle full of dinosaurs to be bet on for sport. If they last seven days, they are granted domestic jobs in this world where kings are evil men and the heroes of earth are merely entertainment. After the drama of the banquet, they are immediately put back to work. Dark Comedy ensues as they are thrown into the deep end by their leader. The five new Ankh must sink or swim as they find their way through emerging powers and new dynamics. With Romance, thrilling adventure and comedy that will keep you giggling, the new Ankh start their forever jobs.

Let There Be Dragons.


She walked with Lexy for what felt like hours into the backdrop of the crimson sunset. Something changed and the silky sensation of her steps in the sand gave way to the rustling of grass underfoot.  She now stood in the centre of and an endless field.  Her soul had brought her to see something beautiful. This scene now felt like a devastating symbol of her mortality.  The field overflowed with delicate purple flowers. She closed her eyes and listened to the soothing hum of the bumblebees, hoping it would bring her back to a better time and place.  Visions of her childhood flashed through her line of sight. There they were as children, lying in the field together, as always, watching the clouds drift by.  Kayn ran towards the bees, waving her arms and they took flight. She crawled around and yanked the flowers from the soil. Lexy made no attempt to stop her. The girl that looked to fields of bees for solace was gone. She couldn’t be the girl that saw purple flowers and reminisced about her best friend slipping one of them into her shoe as a child. He was gone. She wanted to burn this whole field to ash and kick it into the air. She wanted to do that to every memory she had of him. He’d slit her throat during the testing and left her to bleed out into the sand. When she’d retaliated, she’d become a dragon. She wanted to destroy everything beautiful and right for it was all a lie... 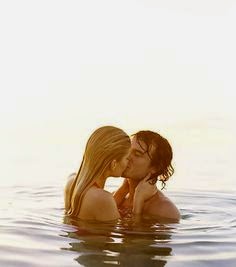 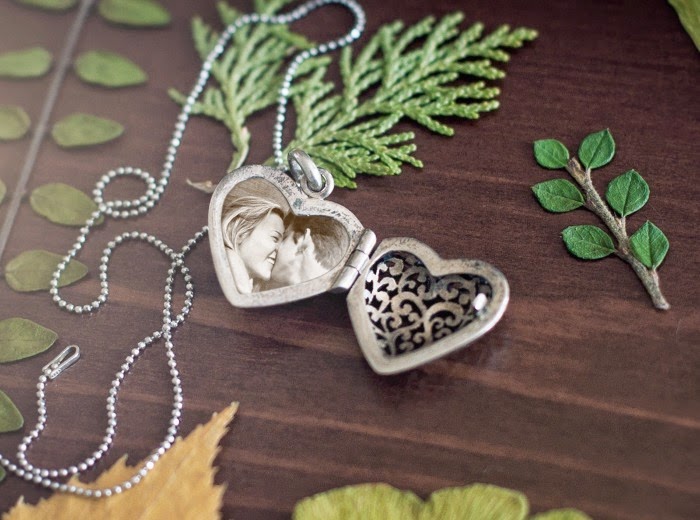 Kayn awoke, sensing something amiss even before she opened her eyes.  Her hands were bound. What in the hell? She struggled to free herself. She should have been able to snap the handcuffs like they were nothing. What was going on?  The lights were off, but she sensed his presence. It couldn’t be?
She whispered, “You have about five seconds to explain yourself before I tear these off of my wrists and kill you.”
A familiar voice teased, “You’d be wasting your energy. Go ahead. Give it your best shot.”
Kayn swallowed the lump in her throat. Why was he here? She struggled to break the chains that bound her, but they wouldn’t budge. Kevin stepped out of the shadows into the faint light that glowed from the plug-in night light near the floor beside the bed. She knew their paths would cross again. It had been a smart move on his part to restrain her.
Kevin grinned at her. He sat down on the bed next to her and said, “So, how’s life?”
Kayn shook her head and replied, “Just frigging wonderful. How’s yours?” She struggled with the chains for a second longer before realizing that her resistance was pointless. These chains had obviously been created to restrain immortals. She'd heard about the spelled restraints Triad used, but never had the pleasure of being bound by them. He was grinning at her frustration. She realized he was smiling at much more than that. She was only wearing underwear and a tank top. She was playing this situation all wrong. His eyes were darker, colder than they were the last time she looked into them. His expression amused, yet far from emotionless.
She decided to go with the situation she’d found herself in and whispered, “You could have just called me, instead of opting for kinky medieval bondage.” Kevin’s eyes flickered in response to her inappropriately timed flirtation.
He chuckled, “Are you flirting with me, Brighton? I thought you were set on killing me? I guess it’s true what they say about the thin line between love and hate?”
Kayn met his intrigued expression with an icy one. She stated, “Oh, I’m still going to kill you.”
Kevin burst out laughing. He replied, “Not today. Today, I’m going to drag you out of here and chuck you in the backseat of my car. Then I’m going to drive you out to the desert and leave you stranded with the rest of your clan. While we steal your little dark-haired friend and make it extremely inconvenient for you to catch up with us.”

Let There Be Dragons by Kim Cormack (Goodreads Author)

Kayn has faced the impossible, the deadly and she has come through the other side, untied with her twin sister’s soul and struggling with the tempest of emotions it creates. She is beginning her immortal life with clan Ankh, gifted as a dragon, a fierce and special warrior, she and her team must come to grips with their abilities and their new lives as they are thrown headlong into battles and situations they are not prepared for.

Her former best friend and boyfriend, Kevin has betrayed Kayn in the most brutal of ways, breaking her heart and aiding in her becoming the heartless dragon she is. Frost is now on her mind, but he belonged to her twin, so Kayn is confused, it is her feelings for Frost, or her sister’s that she feels? Trapped in a world of darkness within her soul, she is not the girl she once was, but her team needs her to learn to deal with her nightmares and step up to the plate when times are the toughest. Kayn is evolving in a world she doesn’t quite understand.

Let There Be Dragons by Kim Cormack is, as she says, not a fantasy, this is a new and brutal reality for Kayn and the Ankh. Fast-paced, charged with tension and confusion, follow along as these five team members learn to work together, fight together and live together as equals and family. Kayn is an amazing heroine, scared, scarred and unsure, she toughs her way through each day giving it her all, including her heart to her new family. Her largest personal turmoil comes from her twisted emotional feelings for one who betrayed her and one she is drawn to. Is she ready for what happens next or the revelations that will be revealed?

Brilliant in a dark way, a little more grown-up than previous books in the series, Let There Be Dragons could be a game-changer for anyone on the fence about reading the Children of Ankh series…I say do it as we cross over from YA to NA with ease and a feeling of natural progression!

I received this ARC edition from Kim Cormack in exchange for my honest review. 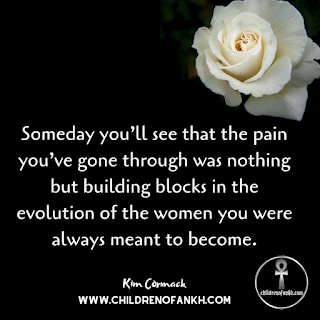 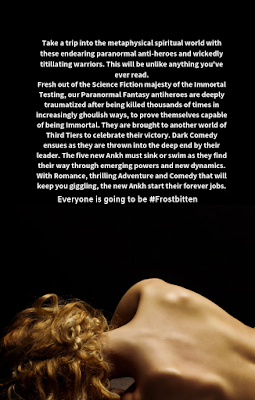 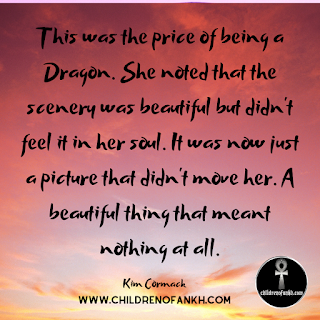 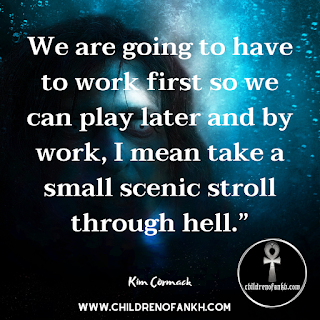 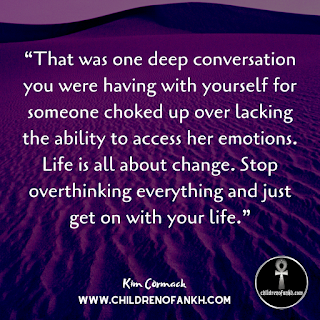 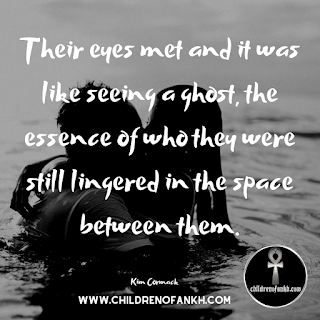 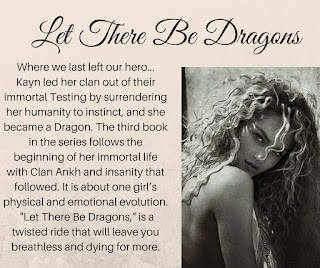 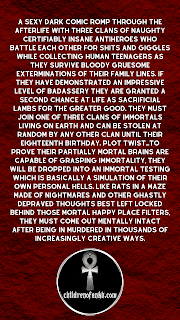 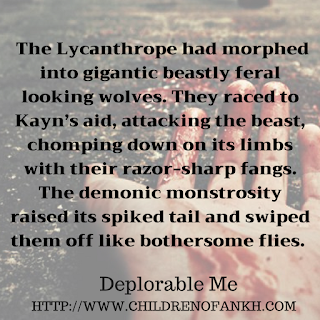 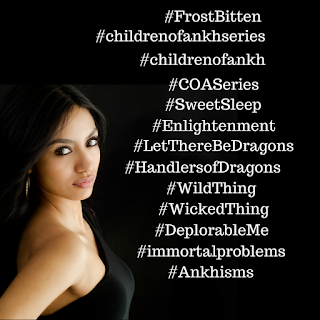 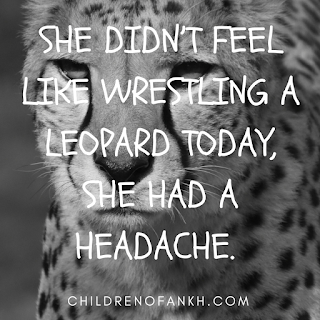 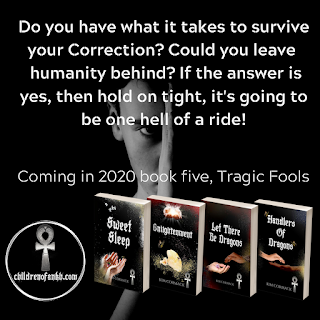 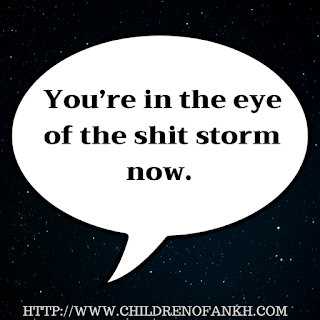 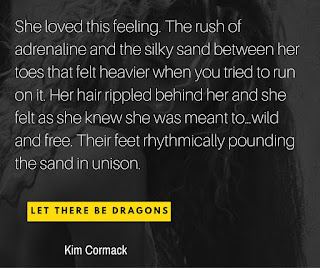 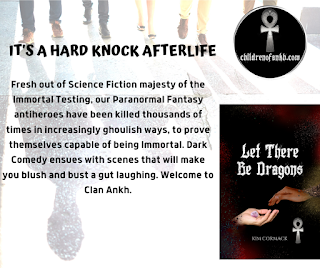 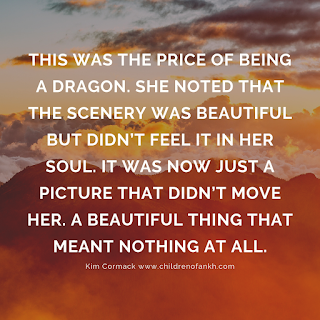 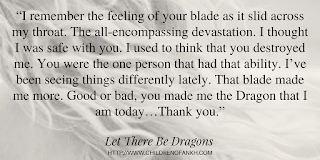 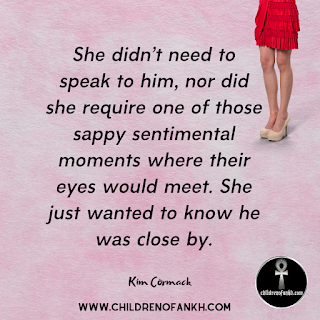 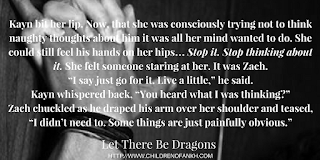