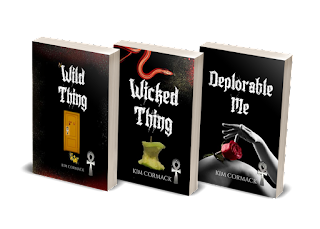 
Endearing antiheroes, wickedly titillating paranormal fantasy warriors and a heartbreaking, magical realism tale of survival against insurmountable odds. She was broken to fulfil an immortal destiny and granted a second chance as a sacrificial lamb for the greater good as a hitman for a Clan of immortals. They needed to create a Dragon, her sanity was collateral damage. It’s a hard knock afterlife.

Some people are born into this world, kicking and screaming. They calm down and manage to find a way to fit into society with a mother, a father or perhaps only one of those two. Alexandria Abrelle was the name on her birth certificate. Lexy had never known that girl. She’d come quietly, subserviently into the world. Born to a mother in a coma during her gestation, she’d been taken from her womb as she slipped away into her next life. Lexy had been living in group homes and foster care for as long as she could remember. There had only been a few that felt right, but either she’d outgrown them, or perhaps, they just hadn’t wanted her anymore. She’d never been given a reason. She decided to run away with a few of the older ones. Tired of allowing someone else to control their lives, they planned to hitchhike across the country. It seemed like a brilliant idea at the time.
She had been reborn in a place far worse than any version of hell, one could imagine. After many years lost in places void of humanity, Grey found her. He introduced her to a partially immortal family. She’d been saved in so many ways by the Ankh. They were the family that she had always been destined to find. They would teach her to embrace the Dragon residing within.

A  comic dark fantasy romp through the afterlife with three Clans of naughty certifiably insane antiheroes who battle while collecting human teenagers as they survive the exterminations of their family lines. If they have demonstrated an impressive level of bravery during their brutal demise, they shall be granted a second chance as sacrificial lambs for the greater good. They must join one of three Clans of immortals on earth and can be stolen at random by another Clan until their eighteenth birthday. Plot twist... to prove their partially mortal brains are capable of grasping immortality, they will be dropped into an Immortal Testing, which is a simulation of their personal hells. Like rats in a maze made of nightmares and other ghastly depraved thoughts best left locked behind mortal happy place filters, they must come out mentally intact after being murdered in thousands of increasingly creative ways.

No matter how far she ventured from this farm, she would always be the monster created within its walls of timber and shame. They would see what she really was. She was a murderer, a psychopath and a victim. She was all three of those things.
She’d an unapologetically feral hitwoman for a Clan of immortals, and sometimes just a girl in love with a boy destined to be her Handler. The only thing standing between them is cannibalism and intimacy induced amnesia. What could go wrong?
She slept a dreamless sleep free of Dragons for she had slain them once again.
Warning: The information contained within this book is not intended for mere mortals. Reading this book may inadvertently trigger your Correction. If you show great bravery during your demise, you may be given a second chance at life by one of the three Guardians of the in-between. For your soul’s protection, you must join one of three Clans of immortals on earth. You are totally still reading this, aren’t you? You’ve got this. Welcome to the Children Of Ankh Series Universe. This is not a fairy tale. This is a nightmare.